How We Got Here, an Apollo Group Whitepaper 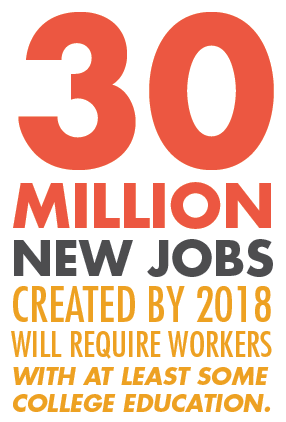 When President Franklin D. Roosevelt signed the G.I. Bill in 1944, it was a pointed moment for our country. We emerged in those years as a global leader in wage parity, productivity and technological innovation: our economy grew, and we prospered. There was a steady increase in educational levels of about a year per decade for Americans born from 1876 to 1951. During the period we looked at, from 1940 to 1980, our population and workforce gained, on average, about a year’s worth of education per decade. It was a time when, as a nation, we were out-educating the world.

But something happened. Between 1980 and 2010, our educational growth stalled to about half a year per decade. We began falling behind. Since then, our economic performance slowed to just above average and many disparities have increased in the U.S. The American workforce is missing the education needed to compete in a global economy. We are, by our calculation, short more than 100 million years of education as a society. Each missing year is represented by a decision not to finish high school, not to enter college, not to stay in college—or a decision not to return.

How did we get here?

Read more of this informative study by the Apollo Group, parent company of the University of Phoenix, to gain insight on how education has become the pivotal economic driver in a struggling global economy. The American Dream lives on, but now more than ever education is the key to achieving it. Unemployment reports focus on how few jobs are created, yet 30 million new jobs will be created by 2018 according to research done for “Education, Jobs and the American Dream: How We Got Here.”

Workforce development begins in school. Businesses should participate in higher education. Be part of it. Be engaged in curriculum design. Be engaged in creating dual or iterative school-work learning systems.

– Jeff Joerres, Chairman of the Board, President and CEO, ManpowerGroup